Tasty Words is a highly acclaimed and long-running spoken word salon created, hosted, and curated by Wendy Hammers. Now in our second smash decade, and having presented over 100 original evenings of story and music, Tasty Words serves up hilarious and horrifying real life stories read and performed by the people who wrote them.

JOIN US FOR AN EVENING OF STORIES, SONGS, AND SIGHING
COCKTAILS, DINNER, AND SHOW
FEINSTEINS AT VITELLO’S
A LOVELY SUPPER CLUB
4349 TUJUNGA, STUDIO CITY 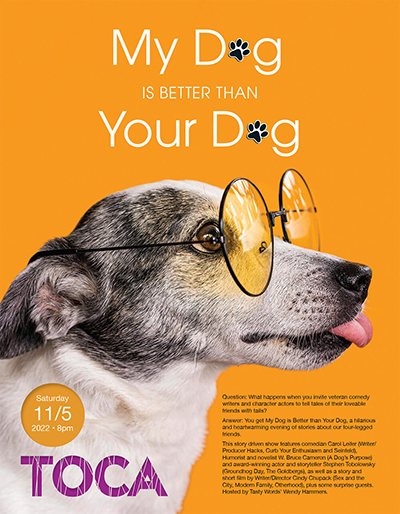 Question: What happens when you invite veteran comedy writers and character actors to tell tales of their loveable friends with tails?

Answer: You get My Dog is Better than Your Dog, a hilarious and heartwarming evening of stories about our four-legged friends.